Timescope is a French company founded in 2015 whose mission is to put virtual reality and augmented reality at the service of spaces welcoming public. By accompanying professional actors of cultural venues, Timescope proposes adapted solutions that promote heritage, increase attractiveness of sites and reinforce the influence of the sector’s brands. More than fifty Timescope terminals have been installed across different sites in France (Paris, Le Havre, Arras, Toulouse, Lyon, etc.) and there are more than 500 000 users.

I am Adrien Sadaka, co-founder and president of Timescope.

Timescope is a business that grew at the CENTQUATRE almost from its beginning, and whose goal is to help cities and cultural sites highlight their heritage in order to make them a real tool for welcoming and attractiveness. For example, we develop virtual reality terminals that function a bit like “time travel machines” and that allow you, in specific sites, to teleport yourself in the past or in the future.

What surprised us the most when we arrived, was the environment of the CENTQUATRE-PARIS: it’s an immense cultural venue that welcomes very varied publics. When you are there, there are artists from all styles that are rehearsing in zones accessible to everyone. We really are in contact with all this creative world!

An example of a connection made between Timescope and artists is the Numéri-Scope project: we called upon artists that are part of the CENTQUATRE’s network to propose to take charge of a Timescope terminal and describe their visions of the future train stations of the Grand Paris project. Digital artworks were therefore integrated to the terminals and were put at the disposal of the inhabitants of the Grand Paris train stations. Here is an example of the link that can be made, what synergy can be created between the art world at the CENTQUATRE and the startups of the 104factory ecosystem.

“We welcome many elected representatives that are often seduced by the space […] they can also experience the space at the same time as they discover us and our services.”

In my memories, there are several great anecdotes, namely one with the current Prime Minister when he was Mayor of Le Havre who, after having visited the CENTQUATRE, ordered Timescope terminals for his city, as part of Le Havre’s 500th anniversary.

We actually welcome many elected representatives that are often completely seduced by the space: the fact of being in a very open and creative space is a real advantage! Namely for the welcome we can offer our clients when they come to see us. The visitors can experience the space at the same time as discovering us and our services. 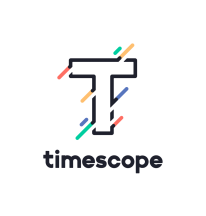